Haruna Matsuo Sensei was born in 1925 and started training in kendo at age 16, an art he continued to practice in for the rest of his life. However it would be in the art of Musō Jikiden Eishin-ryū Iaido that he would have his greatest impact despite coming to Iai quite late at the age of 46.

Haruna Sensei began his study of Iai under Yoshikazau Yamashibu, 8th dan Hanshi, whose own teacher was Harasuke Yamamoto a direct student of Masamichi Oe, the 17th Headmaster of the Musō Jikiden Eishin-ryū.  A former junior high school science teacher, Haruna sensei would in 30 years achieve a level of skill and mastery in Iai that few others have done. He was awarded the rank of Hachidan and in his own words from an interview in 1994...

"I have participated in Provincial and National competitions and demonstrations 256 times. Of these I lose completely 12 times, came in third 8 times and second 28 times. I was awarded "Best Fighting Spirit" 45 times and "Special Fighting Spirit" (an award higher than Best Fighting Spirit) 15 times. The rest I won. You can do the math yourself and see how many times that was, I am not sure".

Haruna Sensei taught many times overseas, contributing to the spread of Iaido outside Japan primarily in Northern America and Eupore. He made his first journey over to the UK in 1982 on the invitation of Okimitsu Fujii Sensei, founder of the Kenseikai (Sword Saint Society) dojo's here in Europe and the man who introduced Musō Jikiden Eishin-ryū into the UK. Okimitsu Fujii Sensei always said that we should "look to Haruna" for our Iai and Haruna Sensei became the gold standard and the goal for the manner in which we should study Iaido.

Haruna Sensei was the chief instructor in the Musashi Dojo in Ohara, Okayama Prefecture. This dojo is located next door to the Musashi museum. In 1974 Aoki Kikuo Hisakatsu Hachidai (8th Soke) visited the museum and the dojo and Haruna sensei began studying under him. Haruna sensei continued to study under Imai Soke (10th Soke) and developed the Musashi Kenyu Bu or the "sword friendship club".

Haruna continued to teach and train students in the UK up until 2001. He taught both Musō Jikiden Eishin-ryū Iai and Hyoho Niten Ichi Ryū and they are subsequently both part of the teachings from which the instructor and senior deshi of the Dublin Kenyu bu are based.

"When you do keiko [practice] you should do it seriously... You should do keiko the same as embu [demonstration]. {We should practice if our lives depended on it}. Most people are doing practice without this attitude and that's why they're doing it wrong.

This is what Tomigahara sensei [9 dan Hanshi, Muso Shinden Ryū] always taught me. In the demonstration the students all did "shinken shobu" [fight with a real sword, a serious attitude] but when practising they were not serious. There should be no difference in the two feelings". 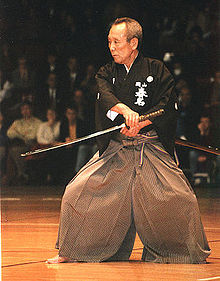