Hyoho Niten Ichi Ryū uses wooden practice swords known as bokken (木剣, bok(u), "wood", and ken, "sword") and kodachi or shotō. These are a special type of bokken, unlike those used in other kenjutsu / sword styles. They are notable as being thinner and lighter and also feature a squared off and flattened kissaki or sword tip.

However the beginning student is welcome to use a standard bokken and for beginners we often supply these.

As many of our students hail from a background of Iai or Kendo we wear the same clothing. Clothing as such in the dojo is generally the hakama (traditional Japanese wide pleated trousers) and kekiogi (jacket similar to that worn in karate). An obi (belt) is also worn. The kaku obi is about 100mm wide and approximately four metres long, and wraps several times around the waist beneath the hakama. This allows the sword to be held securely.

Colours worn are usually dark, with black being generally preferred, but it is advisable to check with one’s instructor before ordering a uniform. Often times we also wear samue (作務衣), traditional work clothing of Japanese Zen Buddhist monks, worn when engaged in samu. Samue are made from cotton or linen and traditionally dyed brown or indigo to distinguish them from formal vestments.

It is of note that there is no set uniform for the study of Hyoho Niten Ichi Ryu, what ever clothes that are loose and comfortable will likely be fine.

Training is normally done barefoot, unless there is a medical reason for not doing so, though tabi (Japanese socks with a separate big toe) may be worn outdoors or for formal displays.

For beginners, however, any clothing that permits a good range of movement can be used – a tracksuit, or judo or karate suit is ideal. A judo/karate belt will also suffice in the initial stages. 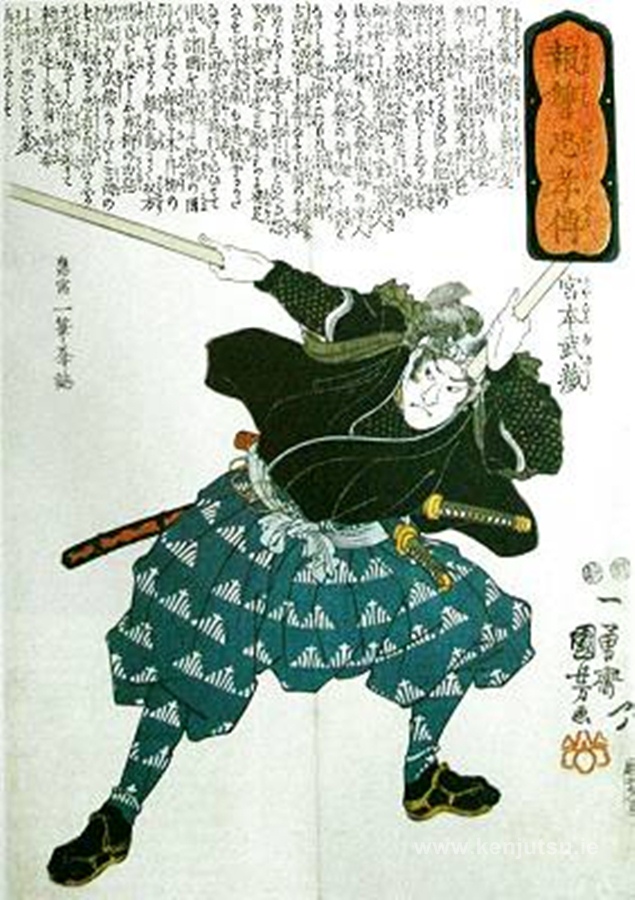